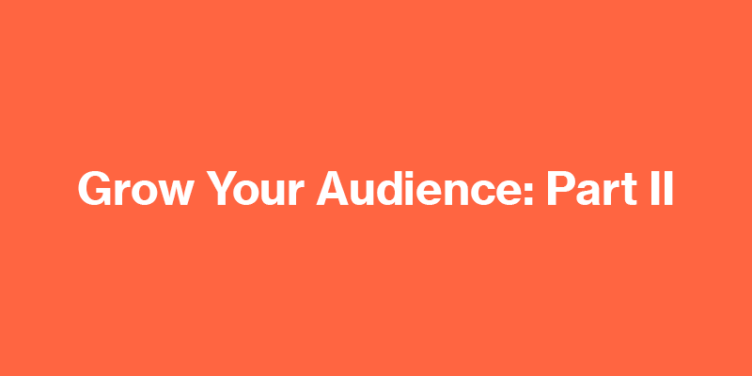 Welcome to Part II of our write-up for BBC Bristol’s ‘Big Ideas’. In the final part of this insightful presentation, two of the top multimedia journalists at BBC Radio Bristol shared their thoughts on how to grow your audience using social media and the powerful new medium of digital storytelling. Unfortunately by this point, the projector was well and truly dead. However, Adam and Rob were still able to deliver their insights admirably.

And without further ado, here are:

10 Quick and Dirty Tips to Grow Your Audience

How can you create a story that will appeal to your audience, without really knowing who they are? You should do your research right from the off: you need to know their average age, how they typically consume media, and also bear in mind their use of mobile.

“The main thing is shares,” says Adam. Shares are how you grow your audience, more so than likes. Rob compares shares and likes to running a cafe that serves excellent eggs benedict. “You may have the same five patrons coming back every day, telling you how much they enjoyed their breakfast. But unless they tell other people, you will never have more than five patrons.”

Be sure to cultivate niche audience interest where you can. BBC Radio Bristol recently shared the story of Hannah Francis and Willberry the Wonder Pony, the tragic but inspirational story of a talented 16-year old event rider who was diagnosed with bone cancer. After being told she couldn’t ride again, Hannah set up an official charity to raise funds for bone cancer research and granting the ‘horsey’ wishes of those with serious illnesses. The story was the most loved and shared in 2016, which was in large part down to the number of niche horse and riding groups who liked and shared it.

“Facebook is not telly,” Adam reminds us. As media consumption has evolved, the BBC has had to get used to telling stories in a different way for a social media audience. In the beginning, they used to post about the antics of the radio presenters and general BBC life, without much engagement. This is perhaps interesting to those who work at the BBC – but maybe not so much to the average Facebook user.

“It’s not a one-way advert,” says Rob. “A good social team needs people who are passionate about social content”. Now BBC Radio Bristol is a journalistic force all of its own. Adam and Rob both stress the importance of post-native content, which is prioritised by Facebook and allows for features like video auto-play to take effect. “Equip yourself with the skills to do things, or you will get left behind,” says Adam.

3. Know what does work

Let’s not forget that people have a tendency to use Facebook as a way of projecting their own personalities, whether that’s caring, funny, socially conscientious, or whatever. That’s why it pays to focus on emotive stories that make a connection with people. “Most people share something because it falls into one of three categories: WTF, LOL or OMG,” says Rob. They may share because they find something interesting, shocking or funny, but ultimately they are also trying to say something about themselves.

Social videos are cut differently for social media. “The big stuff has to go at the top in order to stop people in their tracks as they scroll through their newsfeeds,” explains Adam. This is in contrast to a traditional news package, where the story might build up gradually.

With any social media campaign, it’s important to keep your audience on its toes by mixing things up. Here’s a list of different post types you can experiment with:

Video content is particularly powerful on social media – check out some of BBC Radio Bristol’s video posts here, some of which have accumulated millions of views.

5. Be willing to experiment

“There are so many ways of telling a story on social media, and so many opportunities for those looking to get into social journalism”, says Adam. But to do so, you must have a real passion for it. You must be willing to constantly experiment with new tools, platforms and mediums as soon as they arrive, so that by the time they become mainstream, you already know how it all works. Your life becomes a constant search for the next big ‘thing’.

“The main thing is to ensure your audience is having an interactive experience,” says Rob. As well as varying the format of your content, try varying the time of day that you post. Doing the same thing week-to-week can quickly become boring and repetitive.

6. Make sure you look good

People’s newsfeeds are full of stories vying for their attention. How can you ensure that you stand out? Adam and Rob recommend refreshing your brand’s look on social media every six months, so it doesn’t get out of date. Design trends move so fast that to leave it any longer can be detrimental. But importantly, you still want to retain your identifiable ‘brand feel’.

When it comes to posting, a good rule of thumb is this: ask yourself if you would genuinely be interested in the content if you weren’t the one posting it. Just because it’s social media and not TV doesn’t mean you can get away with poor quality imagery or spelling mistakes. Either way, you should put out the best content you can every time.

7. Show your posts some love

Don’t assume your job is done once a post is out there in the ether. Rob and Adam strongly advise sharing your posts with relevant niche groups, so they can share them. “Help people find your content, ring them up and tell them about it,” says Adam. Back in June, BBC Radio Bristol shared a video on 5 ways to keep your dog cool in the hot weather. Once posted, they immediately contacted the Dog’s Trust, who shortly after shared the video on its own feed.

You should also make an effort to reply to comments – “be as helpful as possible”. When flat fire safety inspections were taking place across Bristol, the BBC published a list of where the inspections would be. A lot of people commented with questions and the team were able to find out the answers. Today’s social journalism is responsive and happening in real-time – this applies to social marketing too.

You need to find out how many people are engaging with you to determine whether your social media efforts are having any effect. “If your posts aren’t getting any engagement, take them down,” says Rob. You can then assess what went wrong – was it a lack of compelling imagery? The time of day? Was the post simply not of interest to the audience? The only way to improve is to be willing to learn from what does and doesn’t seem to work for you.

9. Watch what other people are doing

It’s fine to adapt and repurpose what others in your social space are doing, provided engagement is high and you’re not copying the idea beat-for-beat. “Lad Bible did a great video where they put ice lollies in box and got people to vote for which they thought would melt first,” says Adam, “but when BBC Three did the exact same thing a few days later, it was pretty obvious where they’d got the idea from”.

Observe what others are doing and make sure you understand the difference between inspiration and plagiarism.

To be a successful social media journalist (or marketer), you have to absolutely live for this kind of work. Rob and Adam described a recent day on the job where they spent the morning in an adult ball pit and the afternoon on the HMS Somerset warship. Just an average day at the BBC.

“It’s time to think differently about how we share content,” says Adam. He believes that the Planet Earth 2 clip of the baby iguana narrowly escaping death by snakes definitely helped to boost the youth audience watching on TV due to the clip’s success on digital platforms like Facebook and YouTube. The most watched BBC YouTube clip ever was the clip taken from ‘Adele at the BBC’ with 59.6 million views.

We live in a time where a live video of a boy doing kick-ups can get unprecedented engagement, because the audience were encouraged to guess (and comment) when they thought the ball would drop. Ultimately, we need a bit of nonsense to neutralise some of the frankly terrifying events going on in the world. Pointing a live camera at a room full of puppies doesn’t hurt either.

If you liked this article, please share and comment below. We would love to hear what you think! Make sure you’ve read Part I and stay tuned because we were lucky enough to interview Adam Crowther in more detail about his role and the growing medium of digital storytelling – more on that to follow!