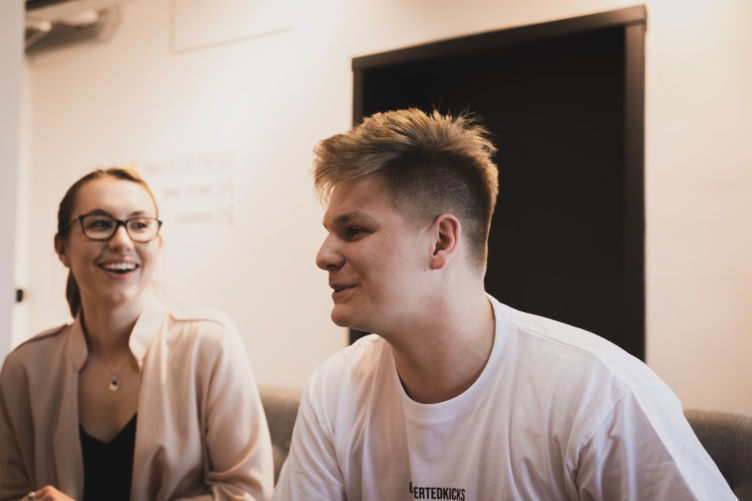 We sat down with Kane to talk custom kicks, the UK grime scene, and why a Tesco cafe is the best place visit when you’re looking for inspiration to launch a new business.

Last April saw our founder Gareth take to BrightonSEO stage to deliver a talk on leveraging machine learning to deliver awesome outreach. It was a big moment for him, and he needed some big kicks to suit. He discovered Kane by chance, seeing the ConvertedKicks brand pop up on his news feed one day.

Gareth reached out to Kane and worked with him to create a pair of branded Seeker sneakers. The two shot some ideas back and forth, and Kane went away to create something special. The result? These beautiful kicks: 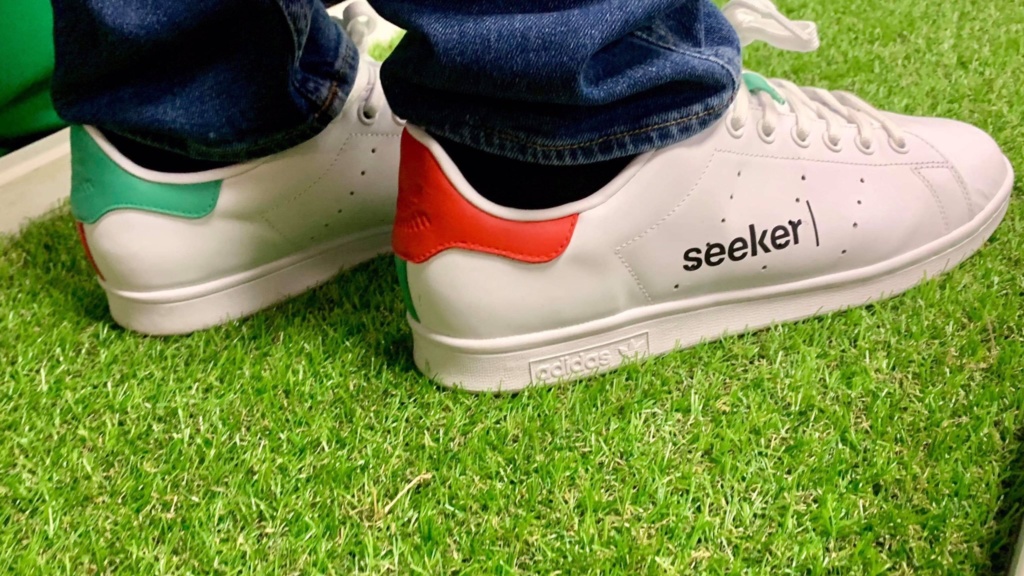 The process of creation was long and intensive. Kane spent hours finding the right brand colours and even took off the lace locks for the final paint job. Gareth was beyond pleased — they were on-brand, cooly minimalist, and perfectly balanced. And like Gareth’s talk, the sneakers went down a storm.

The beginnings of entrepreneurship

It’s a cliche, but Kane had a flair for entrepreneurship from an early age.

His first taste of business success came at school, selling sweets in the playground to his friends. It was a good earner, but like all good entrepreneurs, Kane adapted to change.

When social media arrived on the scene, he moved on to magic tricks, recording himself and sharing his videos on Instagram.

This early experience of social video is evident in his output today, and his Instagram and YouTube are full of artfully-edited behind-the-scenes clips, video tutorials, and unboxing videos.

When play turns into business

After the magic came the shoes. Kane eventually progressed to buying and reselling shoes in London for profit. It was around this time that the idea for ConvertedKicks came back. And as with all good ideas, it started in a Tesco cafe in the early hours of the morning.

Kane has always had a passion for drawing, painting, and creating, and studied Art at GCSE in school. But the prescriptive nature of the education system was too stifling for him. 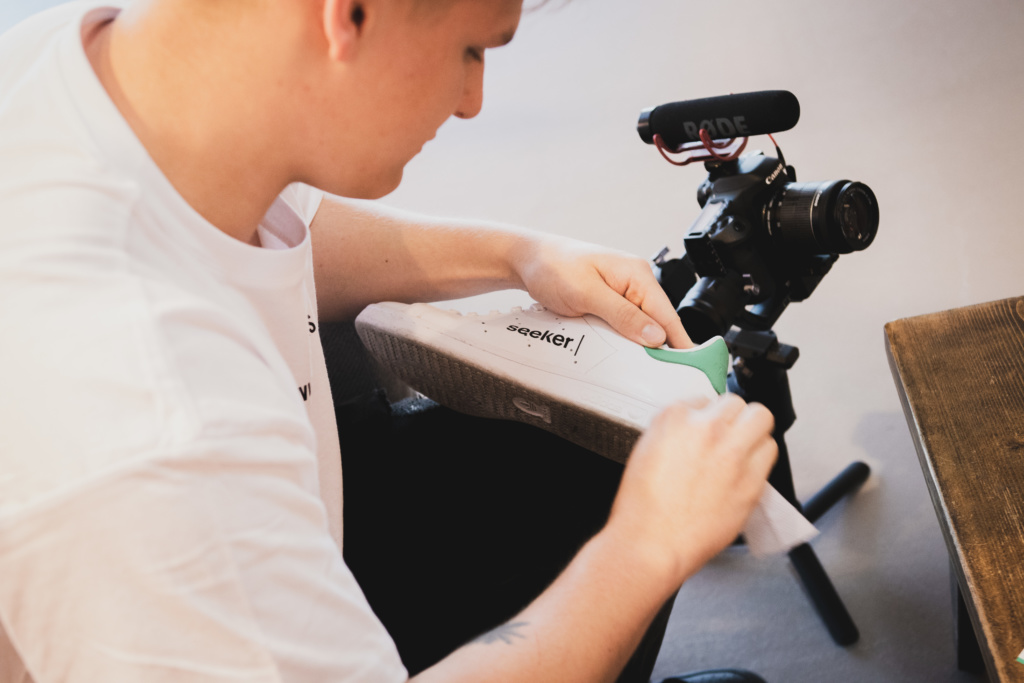 “The idea of school teaching art is beyond my brain,” Kane says. “That’s not what art is about.” Regardless, it gave Kane the skills and the groundwork he needed to launch ConvertedKicks.

His interest in art bloomed alongside his passion for streetwear and fashion. Noticing how a touch of paint on a pair of trainers gave them a new lease of life, Kane set about teaching himself how to do the same.

The process was intensive. He watched hundreds of hours of YouTube tutorials, contacting artists and asking them for pointers. This taught him a great deal but it only got him so far. The distinct ConvertedKicks style was hard-won through hours of trial-and-error. 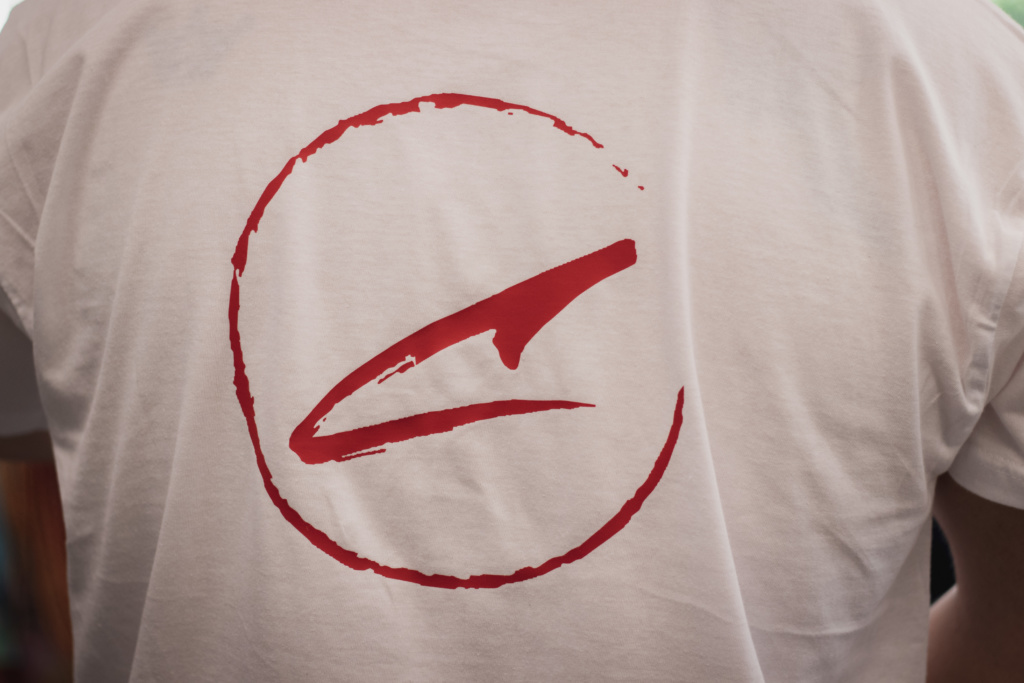 But before he could start producing shoes, Kane needed a name. He and a friend took to the aforementioned Tesco cafe at 2am and trawled YouTube to find a unique name that hadn’t been taken yet. In a moment of inspiration, ConvertedKicks was born. Kane went DIY with his branding, knocking up the distinctive red motif with Logo Maker.

With his name decided and his branding on-point, Kane set about launching his business.

A labour of love

Kane is a perfectionist, and this shows through his work. Perfectly painted, seamlessly sewn, and flawless throughout, you’d be forgiven for thinking his trainers are machine-produced.

But every piece is hand-made from start to finish. While the actual production time varies from project to project, Kane generally spends around four to five hours on each piece.

Beyond simply creating the shoes, a huge amount of time goes into the design stage: matching colours, selecting paints, and so on. For instance, it took Kane 45 minutes alone to get the Seeker branded colours right.

Kane’s products speak for themselves: professionally-made and high-quality, you think they’d sell themselves. But every good entrepreneur knows that the Field Of Dreams method of business doesn’t work — simply making a good product doesn’t guarantee customers.

So Kane got creative.

As his interest in streetwear and custom design grew, so too did his love for the growing UK grime scene. It was in this scene that Kane spotted an opportunity for his brand to grow too.

Kane is a Gary Vee devotee and consumes his work avidly. One lesson that stood out for him? When it comes to sales, it’s all about the numbers. Kane messaged hundreds of grime artists, requesting they collaborate. Amongst those artists was Bugzy Malone.

Despite Bugzy’s notoriety, he runs a small operation. Where other artists required Kane to navigate antsy booking agencies, Bugzy manages himself and he liked what Kane had to offer.

Kane took a pair of leather Nike Tuned Ones and transformed them with some custom Bugzy logo patches (plus a CK patch for some key branding) and a burning red paint job.

The finished product was presented to Bugzy backstage at a Bristol gig — “Rass! That is some f***ing mad s**t!” — and streamed live on the artist’s Snapchat. The resulting social coverage (Bugzy always tags ConvertedKicks whenever he wears his kicks) saw Kane’s subscriber count shoot from 400 to 14K in less than a month.

Kane has since worked other artists including Michael Dapaah (aka Big Shaq), Dig Dat, J1 Stayfresh, and Octavian. Beyond the grime scene, Kane has partnered with the boxer Dontai Leonard for a pair of custom boxing boots for his first fight — which he won, incidentally!

In April, Kane quit his job to work on ConvertedKicks full-time. The business is only two years old, but he’s learned a lot during those 24 months. Here are just a few lessons he took away from his experience.

With influencers, you’re on their clock

Kane has dozens of pairs of custom shoes and accessories lining his walls, just ready to be sent off to his influencer contacts. But in Kane’s business, content is key for growth. So if a client is busy, then you’ll have to wait.

When you work with influencers, you’re on their clock. It’s worth the wait for the resulting coverage, but it’s a waiting game nonetheless.

Kane has no shortage of prospects contacting him for a collaboration. But more often than not, once they’ve worked through the design stage with him, they back out. Citing a lack of funds (or, in some cases, their parents’ approval), many prospective clients often fail to convert.

Before working with a client, ensure you’re on the same page. Identify costs from the outset, and give them the chance to back out before you devote time and resources to them.

Kane didn’t get a 100% success rate from his outreach from the start. He cast a wide net, emailing hundreds of influencers at a time. It was strenuous, but it succeeded.

Sales outreach is about sifting through 99% of mud to find 1% of gold. Bugzy was Kane’s 1%, and he helped grow ConvertedKicks massively as a brand.

Outsource the thing that’s holding you up

Right now, Kane has to be every role in his business: designer, marketer, accountant, editor, and so on. But as his business grows, these roles can hinder, rather than help. For Kane, editing his all-important video content is his biggest blockage.

As you grow, you should outsource your own hindrance. Maybe you don’t have the time to do it, or maybe you just don’t like doing it. Whatever it is, when you can afford to pay someone else to do it, go for it.

You miss all the shots you don’t take

One of Kane’s biggest regrets? After Bugzy Malone’s Bristol set, the artist was speaking to rapper Dizzee Rascal. He didn’t work up the courage to speak to him, missing out on a chance to collaborate with a grime icon.

Kane made up for this later by introducing himself to Post Malone during the Big Shaq unboxing meet at Glasto in 2018. But the lesson is clear: when an opportunity arises, take it.

Man’s not hot, but ConvertedKicks sure is. Thanks to a unique niche, high-quality product, and creative influencer marketing, Kane’s business is flourishing. Thanks for coming in Kane, we look forward to watching ConvertedKicks grow in 2019!