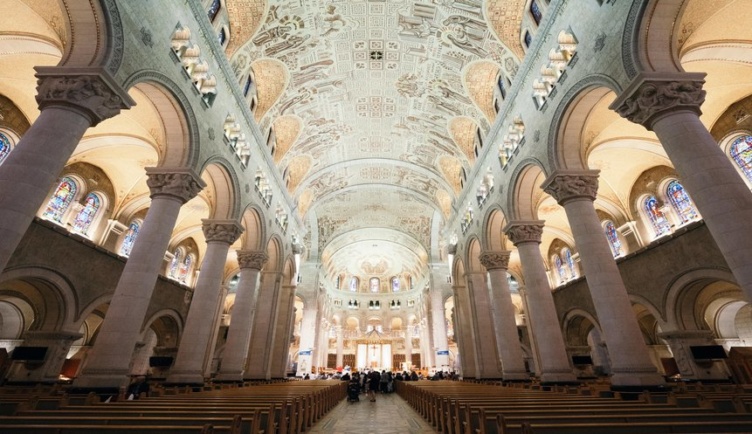 Every year, around 5 million people make the journey to Vatican City, the Pope’s official residence and the world’s smallest country. They crane their necks upwards at the beauty of the Sistine Chapel, gaze in awe at St Peter’s Basilica, and quietly tread the floors of the Vatican Museums.

But 5 million? That’s a drop in the ocean compared to the number of people influencers attract.

As well as being a successful pop singer, Selena Gomez is also one of the biggest influencers in the world. She counts more than 128 million followers on her Instagram account, gaining an average of more than one million new followers every month.

Every day, followers check out her Instagram in their thousands. They crane their necks for a glimpse of her onstage, gaze in awe at her Harper’s Bazaar cover, and are quietly captivated by her music videos.

As the example above shows, it’s easy to draw comparisons between influencers and religion.

Join me as I extend this laboured religious metaphor to show you why influencers are the new religion, and what that means for brands in 2019.

They create a community of like-minded individuals

Influencers — micro influencers in particular — are adept at building a community. Like the most charismatic preachers, they know how to speak to their flock. Indeed, any marketer worth their salt will tell you that an influencer’s success is down to their relationship with their followers.

Open, candid, friendly, inclusive — it is these qualities that create a positive, lasting relationship between the influencer and their fans. Scroll through the videos of social stars like Zoella or Huda Kattan and you’ll see them gush over their fans, thanking them for their support and declaring their love for them.

For brands, communities are essential. They are repeat customers, brand advocates who sing a business’s praises and provide authentic social proof that money can’t buy. Influencers drive these communities — like a shepherd leads his flock, influencers lead their followers, turning them into your customers.

They are passionate about what they do

Some of the most popular religions are buoyed by passionate reverends, preaching from the pulpit.

From Southern preachers holding fiery sermons in a tent to the quiet English vicar expounding with quiet sincerity on their faith, passion and zeal are at the core of their religion. It rouses the crowd and reminds them why they’re there.

In the same vein, influencers wouldn’t look out of place behind a lectern. If they didn’t have passion for what they do — beauty, music, fashion, makeup — then they wouldn’t be as prolific as they are. They love what they do, and that passion permeates every video, blog post, and piece of content they produce.

Influencers are knowledgeable about the industry or niche they occupy, and they talk about it with energy and enthusiasm. That zeal is infectious and their followers feel the same passion as a result.

But their zeal can also lead to volatility and unsubstantiated claims, whipping people up into a righteous rage, or succumbing to huge brand backlash.

They drive conversions (sort of)

A truly successful religion is, naturally, one that drives conversions. Scores of people convert to a religion, embracing it as a key part of their life. Likewise, influencers drive conversions, albeit the kind of conversions you present to your client rather than the spiritual kind.

The best influencers are those that get their followers to convert to their partnered brand. They proselytise to their audience, urging them to buy a certain soft drink or wear a certain clothing label.

Influencers are successful at this too. Their connection with their followers and their unique, passionate style of delivery compels consumers to convert to an influencer’s brand partner. Just as a captivating sermon encourages people to donate at the end of a service, so too does an engaging influencer campaign get customers to whip out their wallets.

Okay, maybe I’m overselling it a little when I compare social media influencers to worldwide religions that literally billions of people follow and base their entire lives around.

Influencers aren’t a Holy Grail, and they’re not without their flaws. Just as Lucifer fell from the heavens, so too is the influencer community littered with fallen angels.

Fyre Festival was the festival that never was.

It promised to be the party of the decade: a luxury, high-class event featuring private jets, luxury villas, and an island once owned by Pablo Escobar, all promoted heavily by influencers such as Kendall Jenner, Bella Hadid, and Emily Ratajkowski.

Unfortunately, the organisers of the festival should’ve stuck to organising a piss-up at a brewery, because it wasn’t great. A plethora of logistical mistakes and straight-up disasters eventually led to the festival’s organiser, Billy McFarland being jailed for six years.

And the influencers? Well, they didn’t escape unscathed.

Despite taking a reported $250K for a single Instagram post promoting the event, Jenner failed to make it clear that this was a paid ad.

This contravened the Federal Trade Commission’s 2017 stipulation that influencers must disclose any sponsored content, landing her in hot water. At the time of writing, the agencies representing Jenner, Hadid, and Ratajkowski have been subpoenaed.

“I hope all these celebrities shit their pants in public”

Similarly, there are countless examples of influencers promoting often dangerous and addictive weight loss products to the followers.

Kim Kardashian, for example, shared a post extolling the virtues of an appetite-suppressing lollipop, and Cardi B promoted a laxative detox tea (without declaring it an #ad — oops).

Many of these influencers’ followers are young and impressionable teens who look up to them as role models — clearly a damaging trend. Thankfully, a campaign spearheaded by the fearless Jameela Jamil calls out these influencers for their dubious, unethical partnerships.

They got Cardi B on the laxative nonsense “detox” tea. GOD I hope all these celebrities all shit their pants in public, the way the poor women who buy this nonsense upon their recommendation do. Not that they actually take this shit. They just flog it because they need MORE MONEY pic.twitter.com/OhmTjjWVOp

But ultimately, the responsibility rests on the shoulders of the influencer — the choice between ethics and a payday lies with them alone. But with a six-digit pay cheque in front of them, it’s not hard to see which option they’d choose.

The 12 Days of Zoella

Some of you reading this might have had yourself a very Zoella Christmas in 2017. If so, please accept my commiserations.

A few years ago, the beauty vlogger launched her very own advent calendar. For just £50, her followers were able to bag themselves an advent calendar with 12 doors (you can’t fault Zoella’s adherence to tradition) and a variety of uninspiring gifts.

From cheap cookie cutters and confetti to pens and keyrings, the gifts were roughly on par with those in Poundland’s Christmas crackers (no offence, Poundland, I will never stop shopping with you).

But opinion is divided over Zoella’s calendar. On the one hand, it’s a flagrant disregard for her adoring fans, inviting them to pay top dollar for a sub-par product.

On the other hand, she’s just one of many influencers offering such uninspiring products. And as a woman, Zoella is also arguably under closer scrutiny by the world’s gaze.

That said, there are other influencers doing much worse.

The gaming vlogger/full-time cretin PewDiePie has caused controversy over his racial, sexist, and anti-Semitic slurs, and prankster Logan Paul hit the headlines in 2017 for publishing a clip of a dead body in Japan’s Suicide Forest.

For better or worse, influencers are people too — flaws and all.

So what does the future hold for influencer marketing?

Have macro-influencers such as Kendall Jenner and Cardi B damaged influencer marketing forever? Of course not. As long as social media is still a thing, there will always be big influencers working with big brands (with even bigger budgets).

But influencers have been tarnished.

The Fyre Festival fiasco shows that influencers aren’t beyond the law. Failure to declare a sponsored post could land a social star in trouble, damaging both their reputation and that of their partner brand. The burden lies on both influencers and brands to ensure every partnership meets advertising guidelines.

And what of ethical responsibilities? Influencers promoting dodgy (but legit) products don’t have any legal obligation in these cases. But under the glare of the social spotlight, influencers aren’t impervious to the likes of Jameela Jamil holding them to account.

Despite commanding a follower count below 10K, these niche social stars enjoy a fruitful — and more genuine — relationship with their followers.

For brands, this is a goldmine. Instead of partnering with a single macro influencer for lacklustre awareness, brands can team up with several micro influencers for sincere engagement.

Creating a sprawling campaign that capitalises on authentic influencer-follower relationships are the future of influencer marketing.

We can only hope that they form a new kind of influencer, a whole generation of social stars who grew up during a time in which influencers were scrutinised closer than ever before. They will be more savvy when it comes to partnering with brands, and hyper-aware of what they can and can’t do in order to protect their reputation — and their livelihood.

Okay, so maybe we won’t start turning up to Selena Gomez gigs on Sunday mornings instead of church, and perhaps ‘Wolves’ won’t replace the Lord’s Prayer (yet). But influencers are going through a period of great upheaval, and we can expect to see radical change in the social stars of tomorrow.