Think Python is just for developers? Think again! For those perplexed by the Python programming language, Benjamin Goerler provided a talk about how to spot patterns in data and translate them into actionable Python scripts with ease.

Bringing the fun back to SEO with Python from bgoerler

Benjamin delivered an informative yet entertaining talk on the programming language of python and how it can help automate SEO tasks.

He began by explaining what Python is and why it is a good choice to help you and complete your SEO tasks.

Python is a high-level general-purpose programming language that is easy to learn and works on any device. It does have a steep learning curve, but there’s plenty you can learn in a short frame of time and there are an almost unlimited number of cases for its use.

Python can be used to solve myriad problems, but specifically those that plague your everyday SEO.

Using Python, you can build a code that can reduce the time of analysing crawl data by 66%.

Instead of using the Excel way of:

You can use the following python code:

He then humorously worked out how many pints over the course of the year we could drink (at a frankly ambitious rate of 1 every 10 minutes) with the time saved by using Python.

Benjamin then continued to use an example of how Python could be used to aid the analysis of keyword research.

The Excel way, he pointed out, could take roughly 4 hours:

The Python way, of running the script: python analyse-kw.py -i keywords.csv -o analysis.csv should take around one hour: 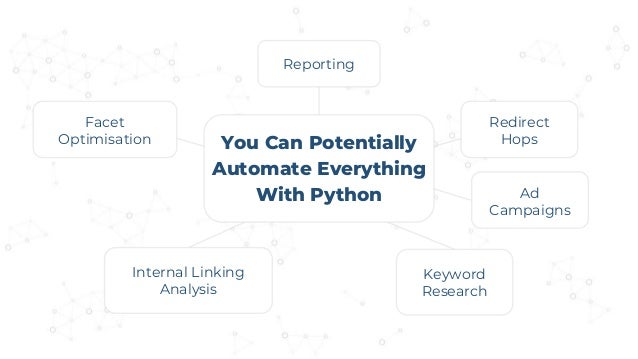 In summary, Benjamin’s portrayal of the tasks you can automate with Python are as endless as his enthusiasm for it. From internal linking analysis to reporting, there is a Python way that takes half as long if you are willing to learn the basics and develop a script.

He left us with some useful resources to begin our Python journey: