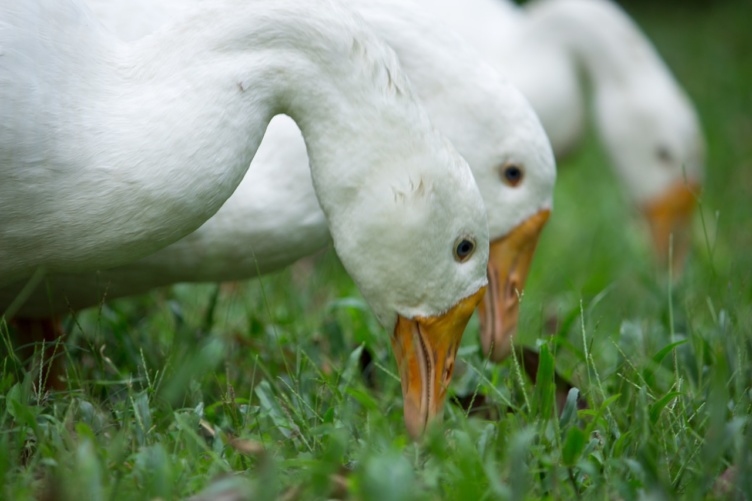 The Digital Gaggle is held twice a year and features a variety of industry leaders, from SEOs and copywriters to marketers and directors. Digital Gaggle also holds monthly meet-ups at Bristol’s Famous Royal Navy Volunteer, where digital marketers can learn, share knowledge, and hobnob with the best of them.

As a self-confessed Gaggle virgin, I wasn’t sure what to expect. As it happens, I wasn’t disappointed. Here’s why.

First on the agenda was Victoria Olsina, growth marketer and possible Spice Girl (long story) from ConsenSys, who opened the conference by tackling the sticky subject of page speed.

For many SEOs, both agency and in-house, convincing your client or boss of the importance of page speed — indeed, SEO as a whole — is a tricky task. The proverbial money men and women who ultimately have the final say on a project are one of the most common barriers to completing a page speed update.

As Victoria says: nobody cares about Google but you.

When you’re making the case to your boss for a page speed update project, Victoria recommends anchoring your suggestions to KPIs the key stakeholders care about. Because at the end of the day, they don’t care about the why — they only care about the business case: traffic, conversions and, of course, profit.

But which metrics should SEOs look at to validate this business case? Victoria says:

These are the metrics that Google says matter and only one of them is about quantifiable speed. The final two are simply about the perception of speed — that is, enhancing user experience through illusion.

ConsenSys’ @vykolsina shows us which metrics matter to the non-technical stakeholders – the money guys (via an amazing Trump metaphor) 😍#DigitalGaggle pic.twitter.com/CZASTpQqxo

But Victoria says this much better than I ever could. Find her slides here.

Titled The Struggle For Existence, Hannah Tempest’s talk truly spoke to me (and my angsty teen self) on so many levels. Hannah is Head of Mobile at Nomensa, so knows her stuff when it comes to the world of mobile.

Delivered in some exquisitely illustrated slides (courtesy of Bristol’s own Emily Trotter), Hannah opened by saying that mobile apps were, in a sense, an ecosystem. Each app is an organism, competing for valuable resources to survive: attention, storage space, visibility, and so on.

And just as Charles Darwin positioned that only the fittest will survive, so too will only the best, most optimised apps survive.

It’s a jungle out there: 50% of all apps ever made (ever!) have been deleted by Apple. But Hannah puts forward some on-point ideas to help brands create an apex app that rises to the top of the food chain.

Firstly, a strong app has a lot of visible updates. It’s constantly being optimised and never sits on its laurels. Those updates that benefit the user are preserved (think opposable thumbs), while those that do not are pruned.

A more user-friendly interface, the option to reserve a table online, a quicker load speed are just some of the features users love and should be kept on your app.

But superfluous loading graphics or a pointless cosmetic feature? Ditch them.

An app should be made to delight both the end user and the client. But delight for delight’s own sake shouldn’t be a reason for keeping a feature. Hannah refers to the tail of a bird of paradise to explain: it’s long, it’s ungainly, but it looks great — it delights. But it’s just ornamentation. An ornamentation that doesn’t serve a purpose should be jettisoned, no matter what your client says.

A whole world of Payne

Round three saw us return for our second keynote of the day from sponsor Noisy Little Monkey’s Jon Payne. Effervescent, erudite, and energetic, Jon took us on a whistlestop tour of everything we wanted to know about social media (but were too afraid to ask).

Using questions crowdsourced from attendees ahead of time, Jon’s whirlwind talk touched on topics, including (but not limited to):

In a nutshell, Jon reiterated the importance of getting the basics right and why it matters.

But the overriding theme in Jon’s talk: know your buyer personas. Brands should not simply pay lip service to Stay-At-Home Sam or Commuter Chris. Instead, brands must gear their social media efforts to their customers. Responses to complaints, tone of voice, the content they share — it all needs to be tailored to the consumer.

And here’s what we could have won

Our fourth session saw all the excitement and glitz of daytime game show with the Great British Digital Fortunes Show, hosted by Bray Leino CX’s Alan Thorpe and complete with speedboat prizes and glamorous (as far as primates go at least) assistant.

Going where most conference speakers fear to tread, Alan and his team (via a copyright-infringing Who Wants To Be A Millionaire?-style game show) gave us a valuable insight into how we can do digital better as marketers.

Alan presented two contestants with a series of questions about the digital marketing industry, using the results to show how important digital is for brands.

For example, Alan revealed that almost 90% of marketers believe that their business fails to capitalise on their digital presence. It’s a surprising amount that touches on Victoria’s talk by reiterating how important it is for digital marketers to make their case.

Alan points to luxury fashion house Burberry’s free delivery on all orders as an example of this.

Where other brands charge delivery fees on orders under a certain amount, Burberry provides free delivery on all and sundry. It removes a barrier to the customer’s purchase, improving their perception of the brand in doing so.

At first glance, such a freebie might seem abhorrent to the high-end exclusivity of Burberry. And yet not only does it enhance its customer experience, but it does so without detracting from its brand.

One message that stuck out is the nascent trend of customers preferring experience over a product or service. Alan used the example of Dyson’s popular demo stores as an indicator of this vogue. Why simply buy online when you can try it in-store first?

As more and more high street retailers close their doors due to a lack of footfall and declining sales, it’s a trend that carries particular resonance.

Indeed, you might have read recently that toy retail giant Toys ‘R’ Us is set for a relaunch, with stores focusing on the play experience instead of just commerce. With such big brand names tentatively spreading their tendrils into this space, it’s clear that it’s a trend that carries considerable weight.

Putting on the Ritz

For our fifth and penultimate session, bloggers, copywriters, branding gurus, and logophiles alike scurried off to see wordsmith extraordinaire Bethany Joy’s crash course on How To Find Your Brand Voice.

Bethany was microscopic in her analysis of a successful brand voice. Consistency, the platforms you’re using, the style you’re writing in, the audience you’re writing for — a brand voice comprises multiple elements. Each one works alongside the other to create an organisational personality that

Bethany dissected the Ritz’s exquisite copy to reveal how and why their brand voice works.

Rather than walking into their hotel, we “step into a five-star world”. Instead of having a long history, it’s “steeped in more than 110 years of history”. Bethany has a deep knowledge of language, of the connotations and meanings that words carry, and the interplay between each.

So how do we find our brand voice? Well… 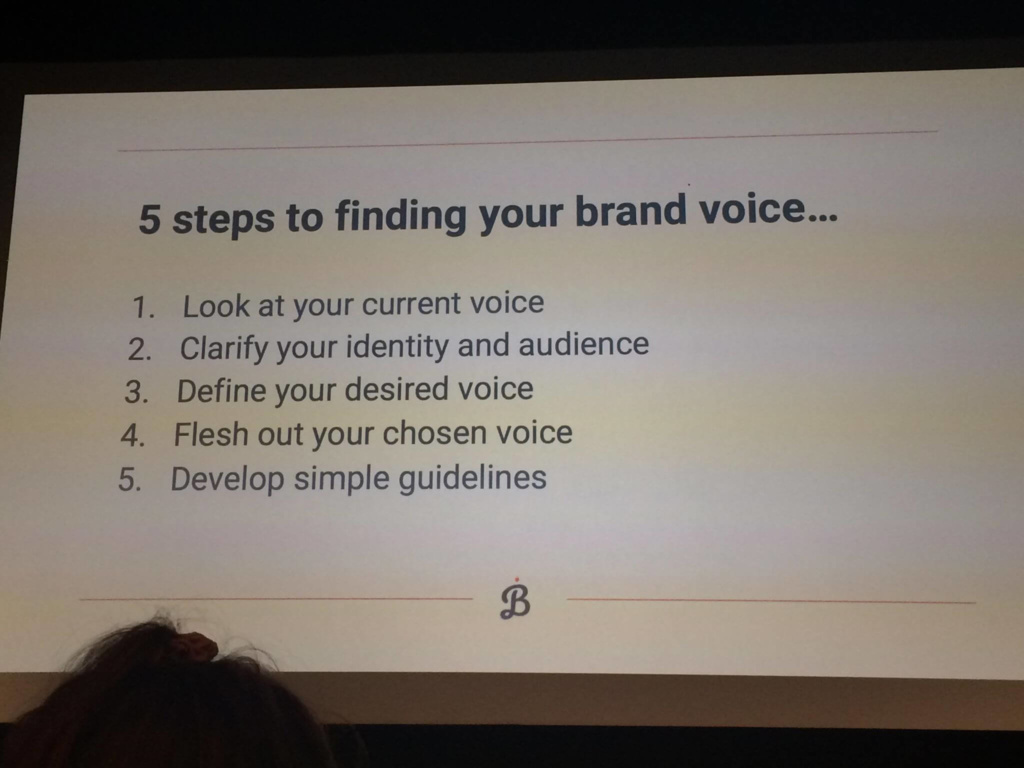 Bethany knows language, and when you know language, you know brand voice.

But all good things come to an end: coffee, cake and, yes, conferences.

Our final talk was from Ogilvy’s James Whatley with a roundup of 2018’s key trends (with a sneak peek at the ones to watch in 2019, but our lips are sealed on that one!).

Like a competition on a kid’s TV show, there were dozens of great entrants, but James could only pick three. The three main trends we ran through were augmented reality, voice search, and influencer marketing.

Voice search is a tricky customer. Adored in some quarters and abhorred in others, it’s a trend that’s working its way into the hearts of many.

But despite this modicum of animosity, notable brands are embracing voice search — albeit with mixed results.

James noted Burger King’s “What Is The Whopper Burger?” campaign of last year, a 15-second ad that hijacked your Google Home. It was daring, it was risky, it was bold… and it ultimately fell flat with consumers (didn’t they learn from Bono’s Songs Of Innocence giveaway?).

While voice search is on the rise, it’s decidedly not the end of typing, so don’t throw away your keyboard just yet.

And do you remember that heady summer of 2017 when everyone was playing Pokemon Go, traversing the parks and streets to catch them all? Surely no-one is still playing that in 2018?

Well, apparently everyone is, and that’s just the tip of the AR iceberg. Facebook are trialling augmented reality ads right in your News Feed, and Instagram and Snapchat have opened up AR software for brands everywhere.

But while the tech is here, there is a distinct lack of brands using augmented reality technology successfully.

Finally, let’s look at influencer marketing. The darling of brands everywhere, both big and small, for a while it seemed untouchable. But the bubble had to burst sometime, and it did so with quite the bang in early September.

The now-notorious photo of influencer Scarlett London lounging on a bed with a barely-perceptible bottle of Listerine on her nightstand was met with scorn and derision. While some criticised Scarlett for the content, still others pointed to Listerine for failing to provide a clear, coherent creative direction.

James posited that brand-influencer collaborations are not a hands-off partnership. In 2019, both parties will need to play a role in creating relevant, high-quality content that resonates with consumers.

November’s Digital Gaggle was only six hours long, and yet there were more nuggets of wisdom than you could shake a stick at. Incredible knowledge bombs were dropped in every talk, delivered with crackling energy and passion rarely seen outside of a late night televangelist’s sermon. It was engaging and infectious, and frankly, we can’t wait for the next one.