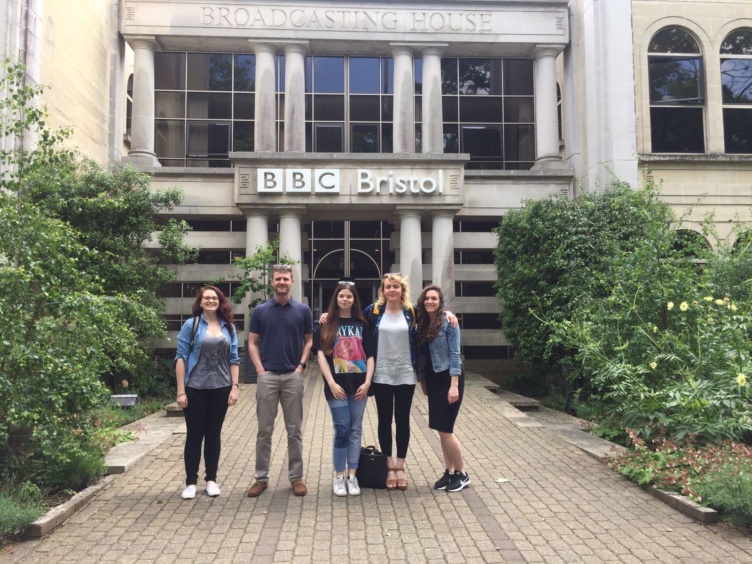 Here at Seeker Digital, we try to organise a fun or educational activity every month. Last month it was improvised theatre on the SS Great Britain. Before that, it was the BrightonSEO conference. This month, we stumbled upon a little hidden gem, nestled among some carefully tended gardens on Whiteladies Road…

The Home of BBC Bristol opens its doors to the public every month for guided tours. It’s a chance to get a sneak peek into the studios and offices of one of Britain’s proudest and most innovative organisations.

Flies on the wall

The BBC has been at Broadcasting House on Whiteladies Road for 80 years now and is home to some of the country’s most beloved programming, including Planet Earth, The Antiques Roadshow, Countryfile, and all manner of cooking shows. It also hosts the BBC Points West news team and BBC Radio Bristol. BBC execs chose this place in 1934 whilst filling up with fuel over the road, and decided it would make an ideal location when travelling between Wales and London. Now it’s a huge complex – perhaps much bigger than people realise.

We were greeted by two exceptionally friendly BBC staff members, Pippa and Meg, who had firsthand experience working behind the scenes at this unique organisation. After an introductory video (featuring some of our favourite footage from Planet Earth 2) we began our tour, starting with the weather garden. I can say this much for the BBC – they love a good garden.

Bristol weatherman Ian Fergusson has a neat little set-up in the BBC Bristol garden, with a medley of filming equipment and screens tucked away in a shed. Out there by himself on the decking in almost any weather, Ian is a one-weather-man-band. 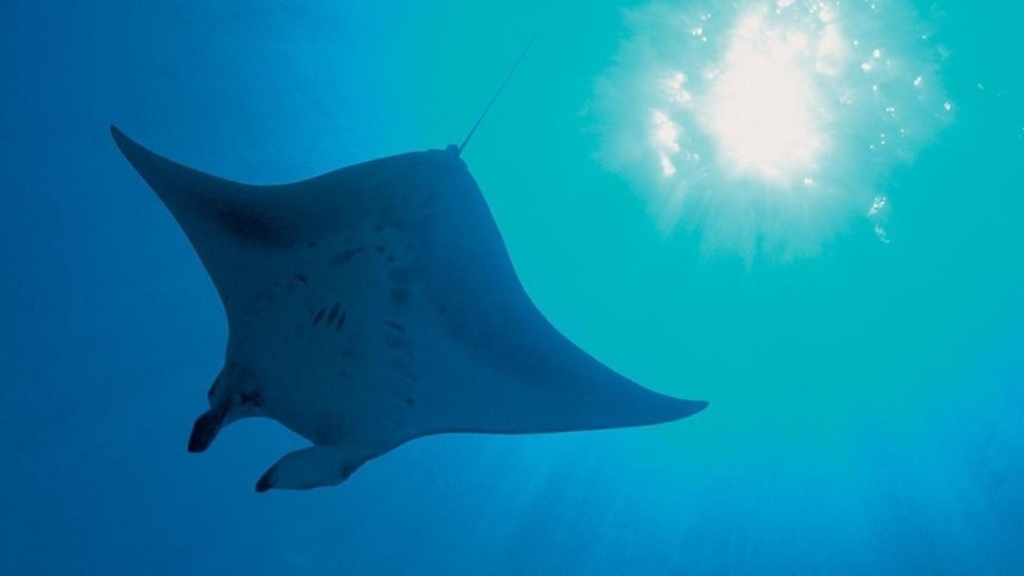 Bristol’s mayor Marvin Rees was also recently filmed for the local news in the sunshine of the BBC Bristol garden, alongside a luscious, leafy backdrop.

Our next stop was the BBC nature programming department, where the first thing that strikes you is how calm and collected everything appears. The team is currently working on Blue Planet 2, the next in the critically acclaimed series of David Attenborough’s marine documentary.

But what surprised us even more was this: most of the sounds you hear in modern nature documentaries are not the sounds recorded on the day. While camera technology has come on in leaps and bounds (and they have some pretty long-range cameras, that’s for sure), audio technology has yet to catch up. It would be hard to capture detailed audio without disturbing the animals. And so they often use archived sounds – or failing that, they make the sounds themselves. These are known as foley effects, and it’s less ‘high tech’ than you might imagine. Some of the common ‘noise makers’ include scrunched up tape, bags of corn flour, old gardening gloves and marigolds. It’s old school, but it works. 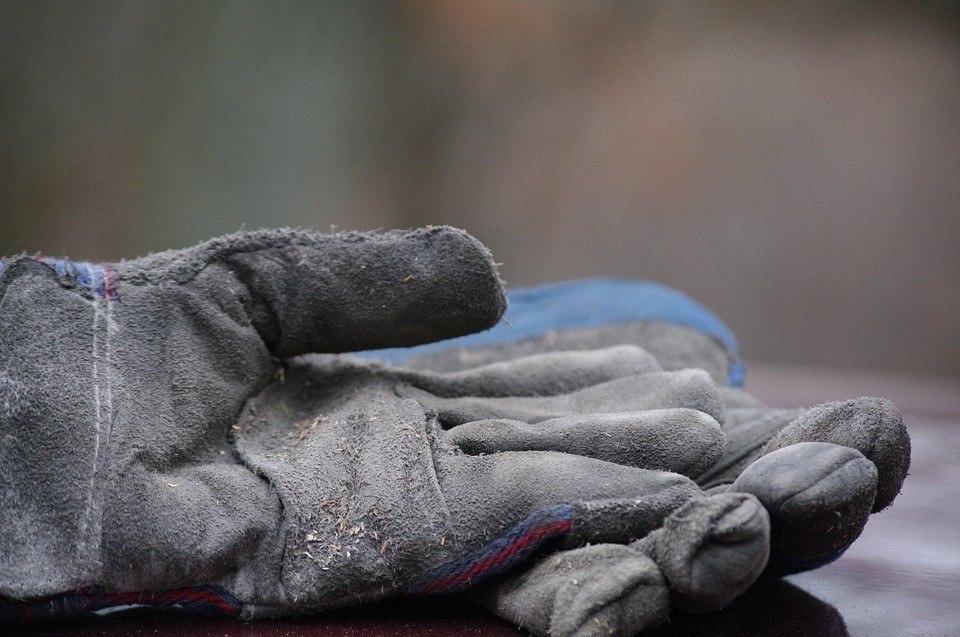 A voice for radio

On the way to the BBC Radio Bristol studios, we passed several rooms with interesting names, including the Attenborough room (naturally). As you enter, you pass a big, bustling room full of journalists, preparing the day’s news. There were some quirky characters in the BBC Radio studio, including one of the presenters (who came out and reminded us all to register to vote) and the producer Steve, who as we all know, likes to eat spaghetti bolognese with his shirt off.

Inside the studio, there are four lights that must be paid attention to. One is ‘live’. Another is ‘fire’. The third is ‘travel’. And the fourth – the blue light – is in case a member of the royal family passes away. So all bases covered…

Back out in the courtyard, Pippa tells us about an old BBC children’s series called ‘Animal Magic’, which used to be presented by Johnny Morris. On several occasions, Bristol Zoo’s Wendy the elephant was walked down Whiteladies Road to the BBC Bristol Studios to participate in the show, sometimes stopping for a bun. How times have changed. 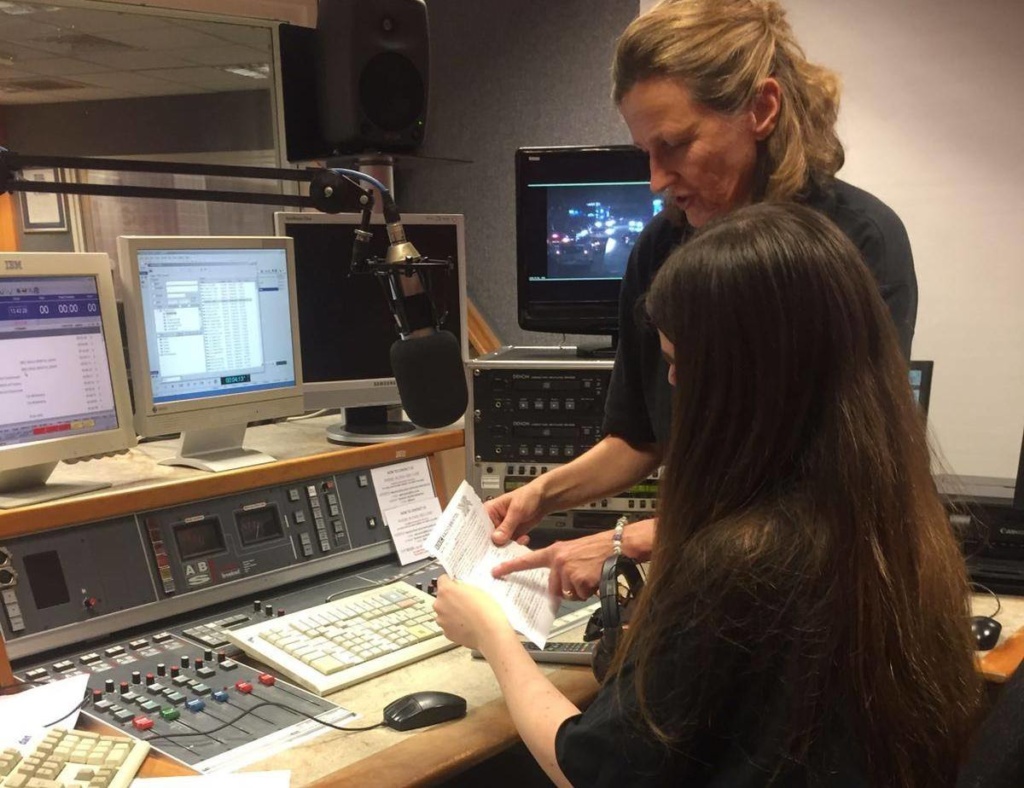 This is the news

And now on BBC Points West: THE NEWS. The BBC Bristol news studio is really something. It’s actually quite surreal to stand amongst the set when the lights are down and the green screen is – well, just a screen. A tip for anyone who might be planning a visit: don’t step on the nice, clean stage area, as I immediately did, in my excitement. Scuff marks are a no-no.

There are four gas-operated cameras in the studio, manned by a single camera person. The presenters arrive already in makeup – they do it themselves before they arrive. There is emergency powder to combat any last-minute shine, tucked away behind the desk.

Above our heads, there was an absolute labyrinth of lighting and other serious-looking technical equipment. But that’s nothing compared to the news gallery behind the scenes, which had more buttons and screens than your average space station (I imagine). The sound engineer was kind enough to demonstrate how he lines up the news theme ‘stings’ that play before the headlines. We asked if he’d heard Bill Bailey’s rave remix of the same tune. He hadn’t. I guess we all learned something.

The most fun ever. In a mini news studio alongside the ‘real’ one, we got to try out newsreading and foley effects for ourselves, with a proper green screen and everything. Fun fact: green screens used to be blue, but were changed to green because people tend to wear blue a lot, and would blend unintentionally into the background. 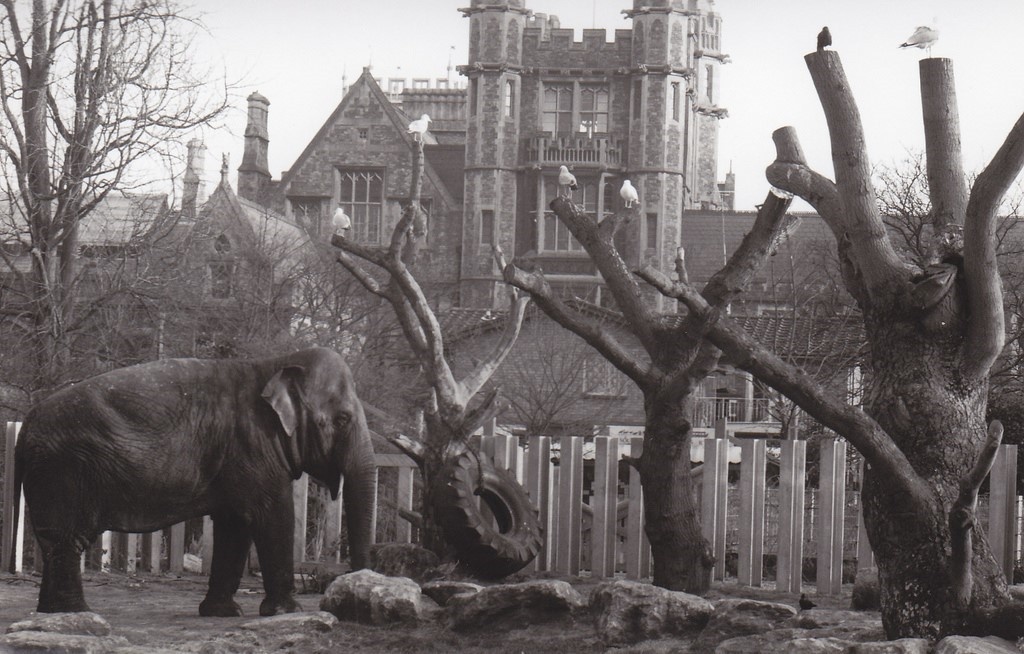 With Jenna on news, Gareth on sport, Kayleigh on weather and Charlotte/Alys manning the script, we delivered a premium current affairs programme to an audience of ourselves, our tour guides, and the rest of our tour group. Kayleigh’s weather improv was particularly impressive. Watch out for those fishing storms, everyone. 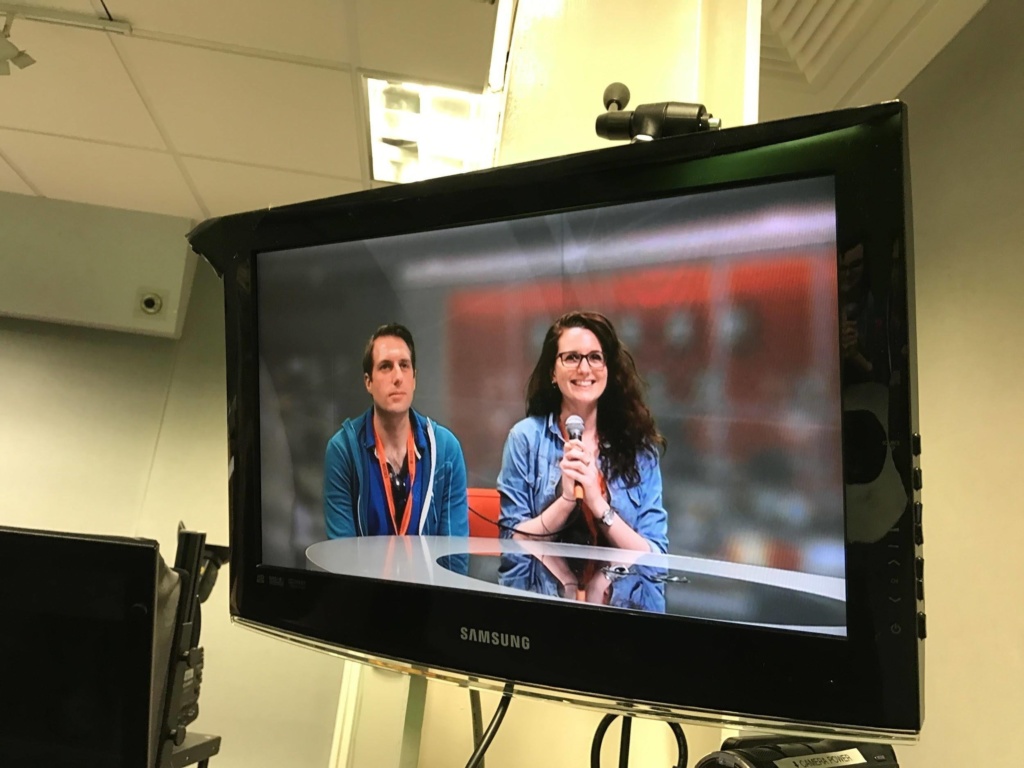 We were also lucky enough to speak to the BBC Bristol social media manager, who told us all about the challenges of new media, particularly short attention spans and packaging information to stand out in a sea of other stories and updates. An interesting discovery: depending on whether you consume your news via the radio, TV news or BBC social media channels, you will hear about different things. This is due to the difference in age between the average BBC radio listener and the average Facebook user (Facebook is their most important social channel). 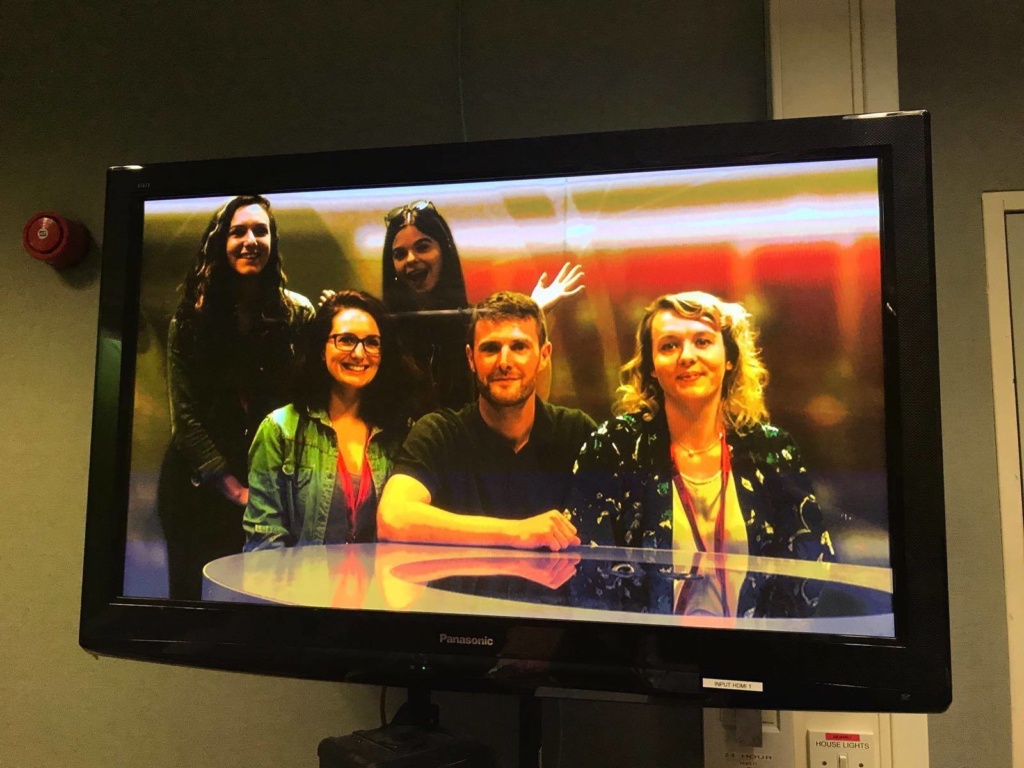 Heading out, we bumped into BBC newsreaders Alex Lovell and Sabet Choudhury having lunch outside and waved like a bunch of absolute tools. We think Alex might have snapchatted us!

On leaving the studio we went to grab some lunch at The Townhouse, and we all agreed that it was strange how few people seem to a) know about these tours and b) go on them. Educational and entertaining, you feel like a fly on the wall of this awesome institution as you walk around, seeing office workers at their desks in the Antiques Roadshow room, radio presenters warming up their voices, and celebrities eating their sandwiches. We left feeling inspired, educated, and proud to work in the same city as this impressive organisation.

Thank you to our wonderful tour guides, the staff who were so welcoming and of course the BBC for their amazing work. If you’re interested in booking a studio tour, check out http://www.bbc.co.uk/showsandtours/tours/ or follow @BBCShowsTours.

Do you enjoy fun days out to places? Do you also enjoy working in digital? If so, maybe you’d like to come and work with us. We’re currently recruiting – contact us here.